Although not strictly Galahad news, the band were very much involved in playing various shows for the Classic Rock Society when it was based purely in Rotherham back in the 1990s and 2000s. Martin Hudson, the founder of the Society who has always been a keen supporter of the band is about to publish a book relating to the lives and times of the CRS.

Of course and as you'd expect, Galahad do feature reasonably prominently. In fact our 1995 live album 'Classic Rock Live' (recorded at the now non-existent Herringthorpe Leisure Centre) was the first joint release between the Society and a band which is no doubt is covered in this new book which is entitled 'Rotherham Rocked' and will be available shortly from the CRS website at: www.classicrocksociety.co.uk for £12.99 plus p&p.

The book also features a forward by honorary president Rick Wakeman and we are sure it will be a great read detailing various anecdotes and stories, some of which are highly amusing over the period from 1991 to 2009.

All profits from the sale of the book will go to Rotherham Hospice which is yet another great reason to grab a copy. 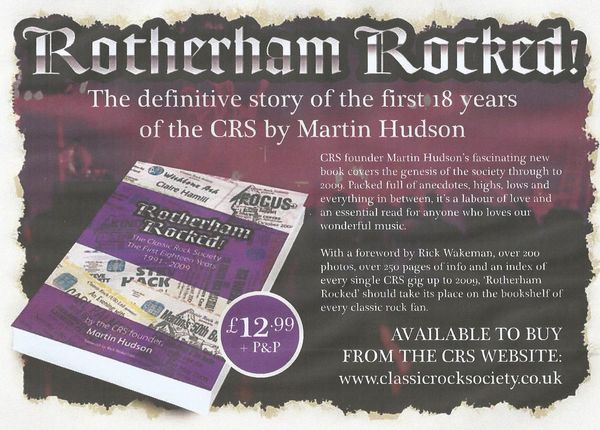